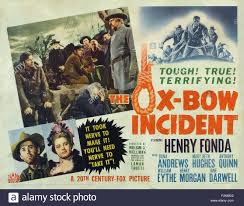 A couple saddle tramps ride into a one horse town to whet their whistles and find something to do.  The bartender tells them there’s not a lot to do but ” Eat, sleep, drink, play poker or fight”. Word comes into the bar that a local rancher has been murdered and his cattle rustled. This sets in motion a rush to find the perpetrators and lynch them. The majority of the towns people have this mindset with a few voices in the minority calling for following the law and doing the right thing. It seems the majority all have personal agendas that are leading them blindly into taking justice into their own hands. The two saddle tramps, cowboys, and a couple of others ride with the make shift posse to make sure justice is served. The posse heads off with hanging on their minds. They find the three cowboys they’re looking for at Ox-Bow. We watch the struggle between life and death and the wills of men on opposite sides of the rope. 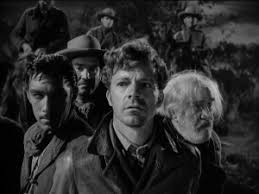 Another flick CB caught at his local run down movie house (couple bucks for a double feature, bring your own bottle and whatever else). Henry Fonda was my hook to sit through this and I’m glad I did. It’s a pretty simple story played out in a bleak, depressing mood. Not a lot of laughs in this one. You really get swept up in the vibe and how, when a mob gets an idea it is hard to reason with and stop. William A. Wellman directs this small scale western based on the book by Walter Van Tilburg Clark. Wellman keeps you engaged and gets some very good performances along with some of those old time stock western characters. Dana Andrews as one of the accused rustlers is totally believable as a man about to die at the hands of vigilantes. Anthony Quinn is also very good as one of the accused.

Like I said it was Fonda that made me sit through this one. He is always good as a cowboy and he’s at his best in this one. Subtle, truthful, in the moment acting (before the so called method style). Henry was born to play cowboys. He’s ready to throw fists at the drop of a hat in this one.

I wasn’t expecting much when I sat through this one. Old, probably dated (in parts) boring. No, it was worth the time and CB was caught up in the story. How it felt to be swept into a mob mentality and how it felt to be wrongly accused.  Bleak, depressing, maddening but a good film. What a great title ‘The Ox-Bow Incident’

19 comments on “Movie : The Ox-Bow Incident”