I’ve always been drawn to this type of music. I took the big plunge with this record. It’s pure acoustic and man can these fellas play. My toe was tappin and my ears were hearing some great licks. Smooth, tight and brilliant. No second rate musicianship here. The vocals are a perfect mix. Harmonies are beautiful. They all step out to solo and they just smoke, then they bring it all together again. I love this stuff. Bobby Hicks on fiddle slays me. I hear the word “master” thrown around. I would but Hicks in that category.

After I fell in love with this record I found out these guys were like a supergroup. They all played in other bands, like Ricki Sckaggs, Emmy Lou Harris’s ‘Hot Band’ and had been around for years. They play the music they love and pay homage to the players that came before them, Bill Monroe, Flatts and Scruggs and many more. 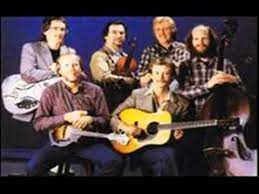 When you master your instrument like these players do you make it seem easy. I would guess that along with the talent they all have they have played until their fingers were raw. They are all top notch, Like Howe Gelb said about Bill Monroe “He was the father of ‘Speed Metal’ (Something like that). And these guys go to town a few times. Its amazing how fast and good these guys are.

Some music just sounds good to my ear and like I’ve said before It chooses me. Once I get locked in it’s hard for me to get out. When I talk about music that moves me well this is some of it. If you want to add some bluegrass to your record pile this would be a good addition. If it grabs you like it did me you’ll be gone and in a good mood. You want roots music well you cant get any closer tan this and old blues. Not a bad cut on the record. A “Bluegrass Festival” on one record.

Take a step outside your box and try this on for size. Won’t hurt. J D Crowe, Tony Rice, Doyle Lawson, Bobby Hicks and Todd Phillips. Take a bow.

To quote Tony Rice “If you take as much pleasure in listening to this album as we did in recording it, it has served it’s purpose”

” Oh I want to go back to my darlin, back to the one I love so well”

(CB had a real hard time picking one cut. They all hit the spot)

40 comments on “Album : The Bluegrass Album”