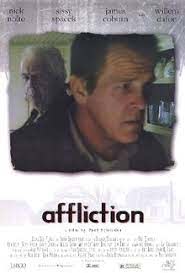 A small northern US town in the middle of winter. It’s deer hunting season. The local cop/road plow driver/ crossing guard (Wade) is struggling to keep it together both with his job and personal life. A hunting accident occurs which our local cop thinks was a murder. He starts to turn up all sorts of evidence that makes him believe his hunch. Corruption, small town goings on and a family past that reveals the outcome of physical and mental abuse. Is our local cop onto something or is his mental state taking him over the edge?

Paul Schrader takes the Russel Banks novel and brings it to life with a really good film. Not going to win any good feeling award. He puts us in the middle of this town in winter time and we feel every bit of the season. You want to bundle up just watching it. Like all good directors he tells the story with the camera using everything at his disposal, location, environment, script and some very good performances.

I love films with lots of great supporting roles and this one has many. Not a wasted character. You believe these people know each other. There’s lots of history in a small town and that comes across from the performances. So much good work. Sissy Spacek as Wade’s girlfriend is as real as you can get. Willem Dafoe also contributes.

The performances that really push the film to what CB likes come from James Coburn and Nick Nolte. Probably the most messed up father/son relationship in film. Coburn’s Glen Whitehouse is just a nasty, mean, drunk, abusive, violent prick.  I loved every second of his screen time. What a good piece of work by James. Hats off to take a role like this and commit to it.

That brings us to Nolte as Wade Whitehouse the son of Glen and one of the results of his fucked up parenting. Nolte balances what’s left of Wade’s sanity against the heavy pull and conditioning of growing up under his dad’s influence. It’s a stacked deck against him. We watch Nolte’s Wade stumble around trying to juggle all the balls in his life. He just doesn’t have the tools. Is it just me or is Nick Nolte one of the best when given good material like this.  Real good performance. Along with his other jobs in the film Nick also finds time to do a little self dentistry.

I really like films like this. Lots going on with all sorts of side bars but it never lost me. The film kept me engaged. A little murder mystery, dirty business with a whole lot of messed up shit going on.

“Jesus freaks and candy asses. That’s what I got for children”