David Lean is one of my favorite film-makers. He has a track record that puts him at the top with me. I grew up (got big) watching his movies. ‘Oliver Twist’ to ‘Lawrence Of Arabia’ and all the other great films in between.

‘Passage To India’ (like Ryan’s Daughter) had to grow on me. I saw it when it first came out at the theater. I was lukewarm about it. Loved the visuals on the big screen, some of the performances, the setting, locations but didn’t get it. Maybe it was the subject matter, more of a female thing that CB wasn’t ready for. Maybe CB was waiting for the Indian version of Colonel Bogie or a camel charge across the dessert. Maybe I was too busy stealing my Gal’s popcorn. Fact is I missed the movie.

A few years later I gave it another go and this time it was a different experience. I picked up so much more that I missed the first time. I just recently watched it again and liked it even more. It really is a good film from top to bottom. This was Lean’s last picture and what a way to go out. It’s a beautiful film with lots going on. Even at this stage CB probably missed a whole lot of the films subtleties. 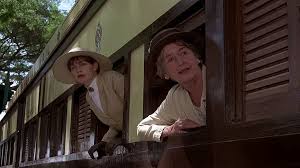 Two English women, one older one younger make a trip to India to visit the older ones son who happens to be the younger one’s fiance. They are both sickened by the colonization that’s going on and want to see and meet the real culture of the Indian people. They do this with mixed results. One incident that turns the insular English world and the local Indian worlds upside down.

Enough said on that. So much going on in this film. Prejudice, class, politics, sexism, friendship, love, sex and so much more. Lean plays it out in a beautiful setting, capturing the whole experience with his skill. He really was one of the best. He adapts the E M Forster story and casts the film to realize his vision. The cast of characters is many and all well done. The two female leads, Judy Davis and Peggy Ashcroft are nothing short of perfect. James Fox and Victor Banerjee are also up to the task. The balancing act these four walk throughout the film is some very good film acting. Natural. Hats off.

Get away from the usual fare and let this film take you into the magic it creates. You really do feel you are there witnessing and experiencing the story.  David Lean puts a cap on his motion picture career with ‘Passage To India’

32 comments on “Movie : Passage To India”