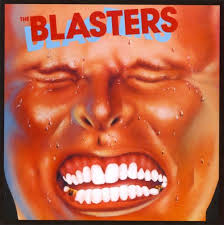 Can’t remember when or how I found these guys but it was with this album back in the early 80’s. Even if I didn’t dig the music I would have had to have the record just for the cover. It’s one of my favorites. However how I came across the record is beside the point. The music hit me and hasn’t let go since. It’s 100% rock n roll all the way. Blaster style. They have become one of my favorite bands. Hey I love them and this album was just the beginning of the relationship.

American music played with everything that goes into it. Rockabilly, blues, country, hell I’ll let them tell you below with their song ‘American Music’. The opening cut opens up an album of non stop music played with passion and guts. Dave Alvin’s searing guitar, Phil Alvin’s unique vocals ( Live, I never saw a guy sweat and give more than him. He felt it) and a band of great players who know their stuff. Gene Taylor laying down boogie piano, Bazz and Bateman on bass and drums and then you throw in Steve Berlin and the great Lee Allen on sax and you have a sound that is The Blasters.

Folks there is not one weak song on this record. ‘No Other Girl’, ‘I’m Shakin’, ‘Border Radio’ they all go together to make up one of my favorite records. When I first got turned onto these guys I thought Dave Alvin was just one great guitar slinger (he rips some great solos on this record) but he has become one of my favorite songwriters. Up there with Springsteen, Fogerty, Robertson, Cale. His style is in that wheelhouse. He has written so many good songs.

As good as these guys were on record their lives shows were a hot ticket. I remember the anticipation when I was going to see them for the first time. Man was I jacked and was I rewarded with a sweaty, loud, hot fantastic night of music. And the guy singing was the guy from the cover of the record.  Let the good times roll. They did. You know about Clarence Clemons ripping it up with Bruce . Lee Allen did the same thing and was probably one of Clarence’s heroes. This was roadhouse, rip it up music.

Jerry Lee, Fats, Little Richard, Berry, Vincent, Cash, Perkins, Elvis , Big Joe Turner and so many others that influenced these guys and they use it to make their own brand of rock n roll. Their cut ‘American Music’ kind of sums up where they are coming from.

This is just good old fashioned good time, feel good music. My Gal also loves this music. And when she’s in a good mood that’s a real good thing for CB. I will be featuring more albums from The Blasters just because I like them a lot. They’re in CB’s Rock N Roll Hall Of Fame.

If I ever lost this record I would be pissed off!

“Fifty thousand watts out of Mexico … listening to the border radio”

35 comments on “Album : The Blasters”