Here’s a record CB got into when he was expanding his music mind. I had another Frank Wess recording where he was playing sax. I liked that one so I took a chance on this. Really not much of a chance. When you’re dealing with musicians of this caliber you’re pretty safe. What caught my eye (and later my ear) was Wess exchanged the sax for the flute. Jazz flute? Yeah and it works just fine in fact it swings and is a treat.

Wess gathers together the right players for this session. Funny thing is you have a bopper like Kenny Clarke on drums swinging with the rest of the band and man do they swing. This music is guaranteed to put you in a good mood. Clarke and Eddie Jones supply the beat for the others to do their thing.

Kenny Burrell and Freddie Green take turns on the guitar and sound just fine. I would have been happy just with their playing. The kick for CB with this record is Wess’ work. I’d never heard anything like it and was completely taken in. I’d heard flute work on other recordings I had but this is an album featuring the instrument and it holds up just fine. The interplay between the guitars and the flute gives a very good sound to my ear. Who would have thought I’d be diggin flute music when I started my musical journey? A real nice fit to my music pile.

This music swings and does not hurt the ear. It’s light and breezy without sounding schmaltzy. It has style ala Django/Grappelli and will have you whistling, smiling and chillin. So whatever kind of musical device you have give yourself some ‘Opus In Swing’ therapy, you’ll feel better for it. Recommended for sure. 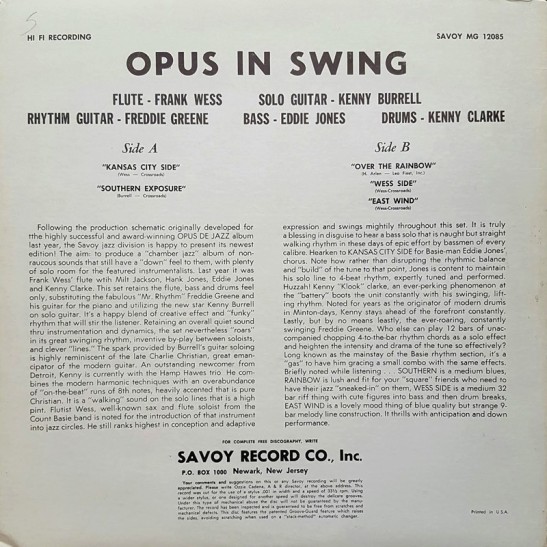 This entry was posted on December 1, 2019 by cincinnatibabyhead in 1956 Album, Frank Wess, Jazz, Opus In Swing and tagged Django, flute, Grappelli, sax.