Album : Bruce Springsteen – Darkness On The Edge Of Town 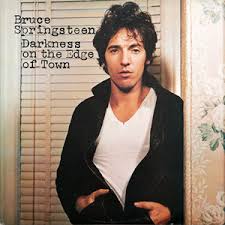 So here it is. CB writing in the now. Warning! The longest take in CB’s history.

Writing about this record is going to be hard to keep short but I’m going to try my best for all our sake.

I’m sure there were bigger fans of Bruce Springsteen’s music back when this record was released than CB but not too many. Up until it’s release I had literally wore out copies of his previous 3 records. I loved them (Takes in CB’s archives). This record was delayed because of legal problems that a young CB could give two shits about ( I have since read all I want on the subject. Bullshit then and now ). Over the years I have anticipated new releases but none more than this one.

Basically I was jonesing for new material. His track record was setting me up for some more great music. All I can say is that I was ready for what this record delivered. From the first note from the first cut I knew it was going to be a special record. It was for me. Like a lyric from another Springsteen song it “Exploded like a runaway train”. ‘Badlands’ kind of lets us know where his head was at and where he was coming from. He was older, scarred , hardened. He was pissed off. What a great way to say I’m back. “I want control right now”. On top of all of that it’s just a great rock song.

Then he hits us with ‘Adam Raised A Cain”. If you thought he might go soft, don’t worry he doesn’t. I saw him perform this song when he toured this record. Probably the loudest cut I had ever heard live. Bruce rips one of my favorite guitar solo’s. He plays it hard and mean. He is letting some kind of demons out through that music machine of his. He was an intense individual on this cut (album). Still sends shivers down my spine. I could do a whole take on just this song. Need a breather after that.

‘Something In The Night” takes it down but is still bursting with energy and emotion. The Bruce wail is in action. Great car driving song

‘Candy’s Room’ Just love this song. Bruce and Max, drums/piano/vocals. What a great sound. Then the passionate wails. He was feeling it big time. You can feel the fire in this one. Max just keeps pushing it and Bruce strangles his guitar again (Have I said that his guitar playing is some of my favorite). Another killer solo. He’s letting the emotion out all over the place especially through the guitar.

‘Racing In The Streets’. Yeah another car song but with a great story. The character trying to hang onto that old life but he’s losing his grip. I knew guys like that. This song probably rubbed a few people the wrong way.  It felt real to me.

First side was a lot to deal with. A bit exhausting. I was feeling this record and I still do.

Side two doesn’t let up for a second

‘The Promised Land’. Springsteen sets the environment and you’re in the song.

You know where his heads at in this one. He’s fighting mad. More wailing and moaning. Both him and Clarence rip a couple beauties. The band is back in formation for this one and feeling what Bruce is feeling. He had come out of a shit experience and he wasn’t the same guy.

‘Factory’. He was feeling some kind of kinship, family, friends. I knew people like this. Again he is in a fighting mood.

“Someones going to get hurt tonight”

Is there a better opening to a song  than ‘Streets Of Fire’? Maybe but I love this one. It just explodes. He really hurts on this one. Man is he letting it out. Again another fantastic guitar solo. He’s strangling that thing.  I mean fantastic!! Give that guy a chill pill.

‘Prove It All Night’. He and the band are letting us know their back 100%. Get on board or get out of the way. We’re not messin’ around. Again Clemons and him go to town on their solos. I guess Bruce just wanted to play again, get the rust off.

Title cut just stamps the record with his mind set. His lyrics sum it up.

Man was he feeling it. When he couldn’t put his tongue to words he wailed. I wanted to be singing this song. 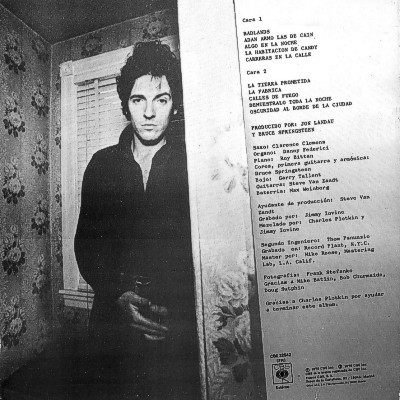 What a ride this record was. He came back and hit it out of the ball park. He was stepping up to the plate and he meant business. He was swinging a real big bat and going for the fences. Was it ever good. He’s never looked back.

This is one of Bruce’s best albums for me. I still feel that emotion/passion that comes through it. Especially in his vocals, lyrics and guitar playing. The E Street Band is really tight. He came out of his negative experience and was changed. His music was changed. Things were different. Some battle scars but he was still a rocker. An all time favorite in my pile.

(I apologize for all the words. CB indulged a little. I’ll shorten it up in the future)

61 comments on “Album : Bruce Springsteen – Darkness On The Edge Of Town”