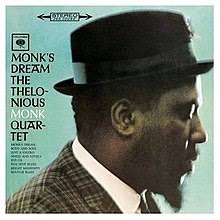 I could have picked various Monk album’s to feature. I have so many I dig. ‘Monk’s Dream’  I wanted to feature  because of Charlie Rouse. Monk and Rouse will always be joined at the hip for me. Charlie’s on sax and being the sax lover that I am I fell for this music in a big way. It’s Monk music but Rouse is the perfect accompany guy for it. I guess the word CB is looking for is chemistry.

The other two accompanist, John Ore (bass) and Frankie Dunlop (drums) also add big time to this music. The first cut (Title Cut. I already did a take on it)) sets up nicely with Monk and the rhythm section laying it down. It would have been enough listening to Thelonious as a trio but Charlie comes in and blows the doors off. I absolutely dig this tune. Something very loose and cool about it. Just a great piece of music. What an intro. Before I get carried away with Rouse I don’t want to forget why I’m here. Monk is fantastic. And I’m still talking about the first cut

I’ve always dug piano but TM’s playing does something to me (moves me). It just appeals to my ear. It might sound off kilter, clunky, non traditional but man do I love it! Like he’s trying to find the right note by elimination. Like a V-8 sputtering and sucking for gas then Varoom! I’m listening to his version of ‘Body and Soul’ as I write this and I’m enjoying it as much now as when I first heard it. 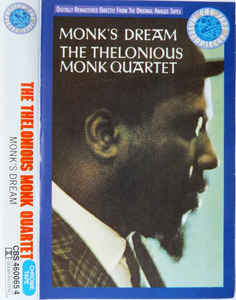 Monk and Rouse are back at their blend on ‘Bright Mississippi’ and I’m back enjoying what they’re doing. This is some good stuff.  Thelonious played with some of the best sax guys ever, Coleman Hawkins, Ike Quebec, Sonny Rollins, John Coltrane to name a few but having Charlie at his side just felt right. I won’t bore the shit out of you with more talk about this album. Bracket some time and give it a go. If it doesn’t grab you I get it but if it does you are in for a musical treat. This is some good jazz. Oh yeah, it swings too.

Monk and this album (actually cassette) took me further into the jazz world. If I wasn’t a fan of this kind of music before, albums like this sealed the deal. Monk is a true original and has given me hours of listening pleasure. I can slap on his stuff anytime and instantly I’m in for the ride.

( He has so many good recordings and there are so many opinions on his music. My only suggestion would be to give a few a go and let your ears do the choosing. Don’t take my word for it. Give Monk a spin)