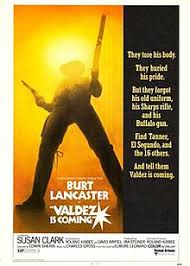 Locals are out in full force taking shots at a man who is holed up in a cabin. It’s like a country picnic. Shooting gallery.  A fun time for the townsfolk.  An older man shows up on a wagon. He’s the local law, Bob Valdez. A quiet Mexican/American who gets filled in on what’s going on. The man in the cabin is accused of murder by a wealthy rancher. Bob puts on his badge and heads down to talk to the man. Things go wrong and the accused murderer is killed by Bob. In the end it was a case of mistaken identity. Valdez feeling guilty and bad on how things worked out tries to collect $200 from the rancher to give the dead man’s Apache wife. This request is met with deaf ears and absolutely no empathy. Valdez tries a second time to collect and gets a beating for his troubles by the ranchers men. Bob decides to fight fire with fire and collect the two hundred dollars.. He breaks out his old army uniform and weapons and sends a message to the rancher, “Valdez is coming”. 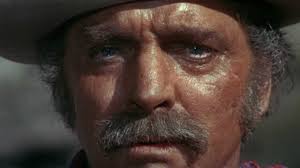 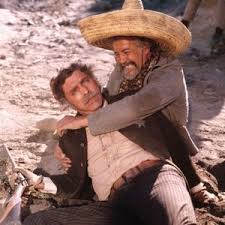 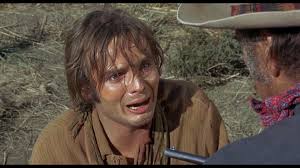 Sitting in a Saturday afternoon matinee, CB was ready for this one and he got what he wanted. A Western, great locations, solid story, lots of really good characters and Burt Lancaster as a Mexican, What? Yeah and it worked for me. Edwin Sherin directs the film and takes a great story by Elmore Leonard (never hurts) and places us right in the middle of it. You feel you’re there. Always a good sign for CB. The cinematography captures the setting. Solid performances by so many. Richard Jordan (one of those real good 70’s bad guys), Frank Silvera, Susan Clark, John Cypher, Barton Heyman .

But the film is Lancaster’s (even playing a Mexican). He has the weight and chops to play an old soldier doing it one last time. He has a tired, quiet essence that changes when he seeks justice. Not over the top, just getting the job done and doing the right thing. I bought his work.

Lots that works for me in the film. A real good duster with lots of action, bad guys and an old guy who want to collect “200 dollars” (you have to say it with a Mexican accent). Valdez is coming and that’s not a good thing if you’ve done a bad thing.

24 comments on “Movie : Valdez Is Coming”