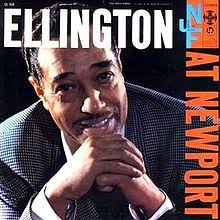 Don’t know what year I first heard this album but I play it a lot. I dig it for so many reasons. The band is introduced and Duke says a few words. It starts out with Jimmy Hamilton on clarinet, a classical feel with Hamilton getting warmed up. But that doesn’t last long. Piano hits a few notes and then the drums and bass start to drive it into Duke Ellington territory. The whole band starts to kick in. Meanwhile the clarinet is starting to jazz it up. Duke is in the background vocalizing to the band. The band is 3 minutes in and you’re listening to one of the best big bands in history. Trumpet, sax, trombone all take short solos. They are swinging already and this is the first cut of a live gig. This is CB’s orchestra music. All the players give a little tease. It’s like, where do they take it from here? Hang on and you will be in orbit real soon.

Duke slows it down for a little breath catcher before the storm with some of that slow sexy blues he and the band play. Duke tickles the ivories like only he can. I love his subtle touch. Comes in with his little touches (CB calls them plunks and dinks). A few nice little solos here. Picks it up on next cut then slows it down again on “Jeeps Blues’ with Johnny Hodges taking a solo. Not too shabby. You can hear Duke digging it in the background. The crowd is into this one. 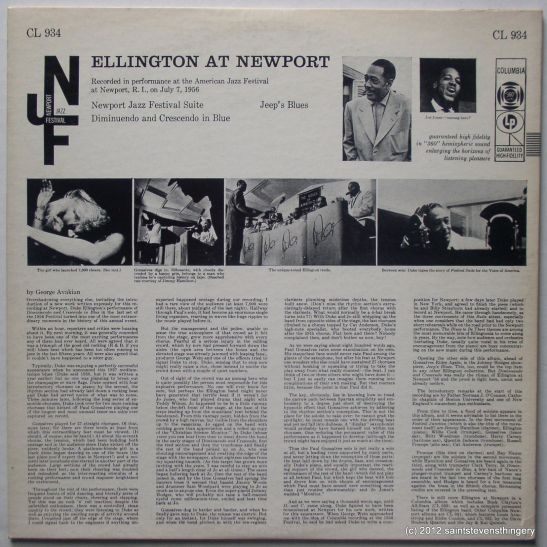 The album is all a set up for the last cut ‘Diminuendo and Crescendo in Blue’ where Ellington says the compositions are “separated by an interval by Paul Gonsalves”. Duke sets the tone with James Woode (bass) and Sam Woodyard (drums). The band jumps in hard then backs off as Gonsalves takes over about 4 minutes in. And man does he take over. One of my all time favorite solos ever. The band is driving him on especially Ellington. He’s hearing his music being played and he’s loving it. Paul’s in orbit. Great musical moment. I get pumped every time I hear it. Ellington must have been one happy man when he was taking the piece out. You can hear it in his playing. (Ken Burns does a bit on this night in his great documentary Jazz).

DE is like the mad conductor with this fantastic band bringing his music to life. Nothing old fashioned about this music. Slip this on and spend a night with Duke and his orchestra and experience a night of timeless iconic music. This is a good taste of what he did in this format. No one did it better. I like his small units also. Lots of reasons I like this album but mostly because it swings. Not only a great jazz record and great Ellington record but a great live record. These guys had miles of playing behind them and Duke knew how to use them.

There has been a lot written and spoken about this record. Lots of good insight. But as usual put the needle down and see what you think. It continues to move CB. No apologies folks. I love this album.

There’s a deluxe version of the album but I love my experience with the original. I’ll get right to the dessert on the cut below. (I’ll include a segment from Ken Burn’s Jazz. It’s a clip talking about this concert)

(My friend hotfox63 plucked an Ellington album out a while back. Check out this really good piece on another Duke gem, a trio with Mingus and Roach. ‘Money Jungle’. Old school meets new school and it is a lesson on how things work. .https://hotfox63.com/tag/duke-ellington/ )