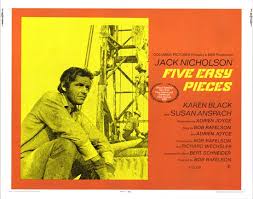 I’m handing over the popcorn and the chocolate covered peanuts to Jim (Doc) from Music Enthusiast. Like a lot of the people I’ve hooked up with on this sharing of music and film, Jim has seen a few films in his time. Like the common ground we’ve found with music we have found the same ground with film. I’ve been on his case to do some film takes. So to probably shut me up he has given of his time and picked a fantastic film to share with us. Back when CB was toiling in the old time movie houses ‘Five Easy Pieces’ was one of the gems I caught. Jack Nicholson was hitting his stride and I was becoming a life long lover of these kinds of films.

So I’m happy to present this fine take from one of my go to guys, Music Enthusiast on Five Easy Pieces’. Thanks Doc! 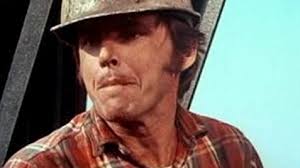 Jack Nicholson hustled in B-movies for years until 1969’s Easy Rider. And suddenly the 32-year old actor – nominated for an Academy Award for his performance – was an overnight sensation. His first dramatic role after Rider was Five Easy Pieces, a tale of a ne’er-do-well scion of a musical family. The title refers to five musical pieces by Chopin, Mozart and Bach. (Eroica is a Beethoven piece.)
Nicholson’s character, Robert “Bobby” Eroica Dupea, is a classically-trained pianist who has never been comfortable in the role his elitist family has laid out for him. In fact, when we first see him, he’s working on the Texas oil fields with his buddy Elton. (Elton’s a good ol’ boy, Bobby plays at being one. In a great scene, Bobby is stuck in a traffic jam on the way to his job, jumps out of his truck and starts playing piano on the back of another truck. Worlds collide.)

Bobby spends his time bitching about his crummy job and low-rent lifestyle. He doesn’t know who or what he is (classical pianist? working class hero? World-class cad?) He has a diner waitress Rayette (terrific Oscar-nominated performance by the late Karen Black) who loves him but who gets empty promises in return. Bobby takes advantage of opportunities to have sex with other women, then lie to Rayette. (One of his “girls on the side” is Sally “Ann” Struthers who would star in All in the Family the following year.)
Bobby eventually has to head back to his home state of Washington when he finds out from his pianist sister that their father has had a couple of strokes. Rayette goes with him and they pick up a (I think) lesbian couple, one of whom hilariously spouts out all sorts of rhetoric about how the world is filled with crap and filth. (Her partner is played by Toni Basil who later went on to sing and have a big hit with a weird cheerleader song called “Hey Mickey.”)
The most famous scene in this movie is the chicken salad sandwich scene. It helps establish Bobby as the simmering hothead who dislikes stupid conformist rules.

Without giving too much more away, it all comes to a head – as you’d suspect – when Bobby gets back home. Feeling embarrassed by her working-class roots, he leaves Rayette in a motel and goes to visit his family. Showing his true colors, he pretty quickly moves on his brother’s girlfriend and shows his disdain for his family and their intellectual pretensions. Bobby finally talks to his now-mute father in a moving and affecting scene, sensitively directed by screenplay writer Bob Rafelson.
At one point in the movie Bobby says, “I move around a lot. Not because I’m looking for anything really, but to get away from things that go bad if I stay.” And the central question for this character by the end of the movie is given his choices, what will he do? The movie states this in a way that is unambiguous, clear and I think, true to the character.

The Seventies were a golden era for this type of character-driven movie and for actors like Nicholson and DeNiro. Highly recommended. The film was nominated for four Academy Awards and five Golden Globe Awards and, in 2000, was selected to be preserved by the Library of Congress in the National Film Registry.