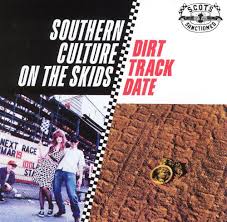 I liked the guitar sound right off the bat. One song and I knew I would like everything about this album and this band. A CCR, Tony Joe White, swampy blues sound.  Especially when you have lyrics like ” I met my baby in a used car lot. Drink’n cheap wine and throwing rocks” Now if that ain’t a recipe for a relationship I don’t know what is.

This is old school rock n roll played new school.  Two guys and a gal who know how to rock and have a good time doing it. I always find when folks have fun playing I have fun listening.

I won’t bore the shit out of you with a lot of my bs.  If you like Link Wray, Dick Dale, Duane Eddy licks (Rick Miller’s guitar work is fantastic, he has the chops and so does the band),  Ennio Morricone  mixed in with some good greasy rock n roll, ‘Dirt Track Date’ is for you. The title is probably the most appropriate title for any album I own. 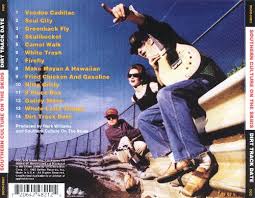 CB never strayed away from music that put a smile on his face and a shake in his leg. “White Trash, don’t you call me that”. They sing two of my three favorite songs about flies to boot. Don’t be fooled, these folks can play. This is a solid record from top to bottom and CB grabs it often. He can’t help it, it’s in his blood. It kicked him in the ass and made him listen. I love this record.

So lets jump in the Pontiac Parisienne slap Southern Culture on the Skids in the 8 track and hit the Dirt Track for a date. Get some greasy fries, onion rings, warm beer and let the good times roll. Lets Rock!!