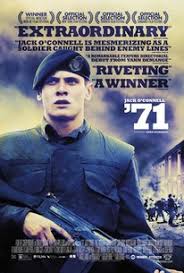 CB is taking a break from his movie scene takes for a while and featuring newer films that have made an impression on him. In other words films he really likes just to show he isn’t stuck in the 70’s.

First film up is ’71. A young British soldier fresh out of  training is sent to the shitstorm that is Belfast in 1971. During his first action, a small riot, he is separated from his unit and spends the next 24 hours in a living hell.

Great top notch film making. Director Yann Demange hits a grand slam. Fantastic film from top to bottom. You like it real, gritty, well paced, emotional, harsh with no holds barred? This will be for you.

They’re still making good ones and this is proof.

This entry was posted on May 13, 2018 by cincinnatibabyhead in 2014 Film, Action Film, British Films, Drama, War Film and tagged Belfast, British, British soldiers.