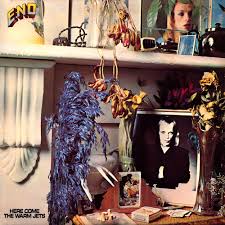 An older brother of a friend of mine knew some of the music I was digging at the time, King Crimson, Genesis, etc.  He said go get this Eno guy’s record, you’ll like it.  So CB scraped enough dough together and headed down to the used record shop.  He found a used copy (I guess the previous owner didn’t like it.  Red flag ).  The clerk looked at me like I was a dog turd and I left with my new used copy of  Here Comes the Warm Jets.

Dave the Roadie was right.  I did like it.  It was definitely a departure. A different style of music with lots of changes, sounds.  It was sort of like a Monty Python skit, the music changed directions fast.  Plus it was completely different than what was popular at the time.  The first two cuts on side one had my attention.  ‘Needles in the Camels Eye’ was the first Eno song CB ever heard.  I liked the sound of the music.  ‘Blowtorch’ had that off beat stuff I liked. ‘Baby’s On Fire’ was the song that sealed the deal..  CB was already a big Robert Fripp fan and his guitar is killer on this one.  I didn’t hear this song coming.  An all time favorite.  ‘Cindy’ is a little pop tune Eno style. ‘Backwards’ just adds more of this new sound to the mix.  Repetitive piano filled in with the sound and some more Fripp. 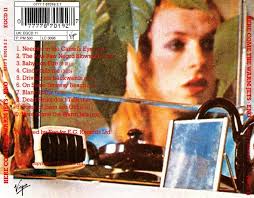 ‘Faraway Beach’ is another song that got to CB quickly.  Has a soundtrack feel. Eno builds this one and comes in with the lyrics.  Love it.  Great sound.  ‘Blank Frank’ comes right after and kinda kills the mood ‘Beach’ set but that’s OK because it’s a great tune with Fripp ripping some great licks.  ‘Finks’ how could CB resist.  Lots of Monty Python/Marx Brothers in this one.  This one is still stuck in my head.  ‘Some of Them’ is another change of pace and then it slides into the title cut. I guess you would call it the Eno sound.

There is lots of great work on this record. Along with Fripp on guitar , Phil Manzanera, Paul Rudolph and Chris Spedding all standout. Eno put it all together like a mad conductor.  This was a different ride for CB but he liked it.  It got into his head and opened up some more musical doors.  Find out more about this Eno guy and his music  was on the to do list.  The lesson here is, if a 250 pound roadie named Dave with long red hair and a beard tells you to listen to something, you listen.