Album : Frank Zappa and the Mothers of Invention – Over-Night Sensation 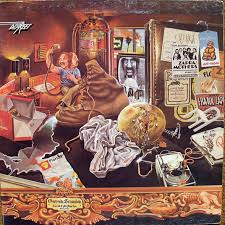 CB’s second venture into Zappa music.  He followed up with ‘Over-Night Sensation’ after he wore out ‘Apostrophe’.  Zappa and the Mothers didn’t waste any time setting the hook deeper with the opening cut, ‘Camarillo Brillo’.  Some of these lyrics would stay with CB forever.  I wasn’t hearing this music on the radio so every song was a surprise. ‘Slime’ was FZ’s take on TV.  He nails it.  Loved the girls voices on this one.   Plus Frank rips a great solo. ‘Dirty Love’ continues on with more of what i was digging.  Frank’s uncensored lyrics and sense of humor get your attention but it’s about the music. The more I heard his guitar the more I was digging it.  ’50/50′ opens with vocals other than Frank’s.  The music moves into a jazzy jam.  George Duke, Jean-Luc Ponty and Zappa all take solos.  CB was eating this stuff up.  Ponty’s violin is a great touch.  The Mothers sound was also getting into the system.

‘Zombie Woof’ opens side two with Frank cutting lose and taking a long solo.  Like he said or somebody said “jazz rock with a little weirdness”.  ‘Dinah – Moe Humm’ takes us on a little sexual adventure Frank style.  It wasn’t going to get any AM playtime.  Love the girls’ vocals on this one also.  “Montana’ ends the album.  Frank giving us some of his great voice and some deep lyrics.  Loved Ruth Underwood vibes on this one.  Frank gives us one more guitar solo.  I couldn’t get enough of his playing.  Also dug his voice.

CB was a little bent and FZ was doing nothing to straighten him out.  His music appealed to me on so many levels.  The bottom line is that there was a lot of musical ideas going on.  Repeated listens always revealed more. Now it was head first into everything he recorded past and current.  I was hearing all this bullshit about him at the time and it had nothing to do with the great music this guy and his band made.  He could only make it one way and that was his way.  Great album.  CB was “Was born to have adventure ….”

25 comments on “Album : Frank Zappa and the Mothers of Invention – Over-Night Sensation”