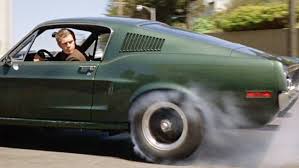 Frank’s sitting in his car.  He sees the Charger across the street.  He buckles up, starts the engine and pulls out.  The Charger with the two heavies pulls out and starts to follow Frank and his Mustang.  They cruise through the San Fran streets in the daytime playing a game of cat and mouse.  The guys in the Charger lose site of the Mustang.  They continue down a steep street trying to spot the car.  The driver looks in his rear view and sees the Mustang coming over the hill behind him.  The position is reversed with both parties knowing the game.  The driver of the Charger buckles his seat belt and he tramps on it!  The chase is on.  Big time! 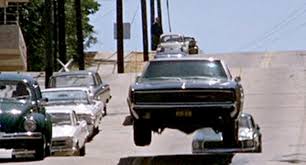 Probably the best car chase ever done in film.  Yates and his team absolutely take the viewer on a thrill ride.  CB can still feel his stomach up in his mouth watching this on the big screen.  The San Francisco streets, the camera work, the music, the sounds of the muscle cars, the stunt driving, the story all add up to a great piece of film.  No horse shit acting just two guys focused on the driving.   Peter Yates sets it all up.  The story is moving a long at a snails pace and then BAM! All hell breaks lose.  Great scene , great flick ( CB did one of his first takes on the whole film)