CB just spent 2 weeks with Ken Burns’ and Lynn Novick’s 10 episode 18 hour documentary film ‘The Vietnam War”.  If you are familiar with Burns and like his work you will not be disappointed.  If you are new to his work (and Novick’s) you are in for a staggering, riveting, emotional film.  The soundtrack is up to the task.  Burns knows his music.  Trent Reznor and Atticus Ross compose the original score.  Great stuff.

The skill and effort that went into this piece of work all ends up on the screen.  As a film lover CB was totally engaged.  As a human being he was totally engaged.  It was an emotional roller coaster.  Tears, anger, frustration and an utter feeling of the  waste of human lives.  Men, women and children with names , uniqueness,  families, friends, lovers.  Burns and Novick make it personal. 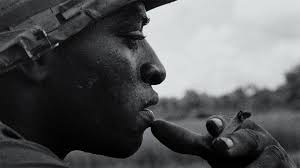 The main things I came away with from this experience was what the men and women (and their families) who fought the battles, on both sides, had to endure and the division it had on the people back in the USA and in Vietnam.  All because of decisions made by people in power who did not do the right thing.  There are no shortage of people to point the finger at, who fucked up and lied.  No one can hide.  There are also no shortages of acts of bravery, selflessness and sacrifice on both sides.   I’m humbled.

CB learned a lot.  Confirmed some things I knew, straightened out some misconceptions I had and had me glued to the box for every minute.  A great piece of work by Burns and Novick.  I’m sure it will resonate with people on a lot of levels.  It did with CB.

27 comments on “Movie : The Vietnam War”