CB Takes Another Trip Into the Future 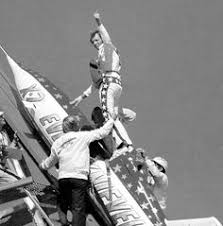 I had so much fun last time I did it again and this time I run into a new(er) Steve Earle recording.  All I can say is this is some good shit.  This time with the help of Hotfox63 the work is done for CB.  There is a eclectic mix of great music/photos on Hotfox63’s station and I really like tuning in.  Fox features some of CB’s favorite musicians that usually don’t get a lot of ink.   Have a look at the take below on Earle & the Dukes, ‘Terraplane’.  Earle just keeps making great music and this featured album proves that to me. The two featured cuts will set the hook.  Another fruitful sojourn into the future.   Some more listening for my ears.  Thanks for the lead Fox and keep this stuff coming!

8 comments on “CB Takes Another Trip Into the Future”