We open with the aftermath of a battle.  Dead, red coated British soldiers are strewn all over the battle field.  Zulu warriors are walking among them collecting the spoils.  We cut to a celebration of Zulu dancing.  A mass wedding is taking place.  A missionary and his daughter are guests.  During the celebration news comes of  Zulu victory over the British.  The missionaries hurry back to their mission where a regiment of the British Army regiment are using the post as a supply depot.

The post hears of the lost battle and of the advancing Zulus.  They now prepare for their own battle.  Just over one hundred men up against four thousand Zulus.  Lieutenant Chard is an engineer and building a bridge at the post.  He is now thrown into command of this impossible situation.  He gets to work organizing the regiment for the onslaught.  His African helpers leave along with a troop of Boar calvery men.  Things are not looking good.  The men really don’t know what they’re in for.  It will be bad but how bad?  The Zulus arrive and the battle commences.  The British don’t have a lot of time to contemplate the odds.  They dig in and fight for their lives and their comrades lives.

CB was totally pulled into this film.  It appealed to his sense of adventure and heroism.  Plus it created the atmosphere for the story to play out.  Overwhelming odds, conflict, comradeship.  A sense of time and place.  CB felt he was there in Africa and part of the regiment.  The film works that kind of feel.  The film makers put the work in and it pays off.  Cy Endfield directs and gets great work from everyone involved.  He sets the tension, never giving us a break from the impending danger.  The way he sets up the anticipation of the Zulus coming and their arrival is great directing.  Just the look on the men’s faces when they see what they’re up against. You feel it.  Stephen Dade’s cinematography  sets the bar high.  The attention to detail in all departments add to the authenticity of the film.  The life of a British soldier is well portrayed.  Men from different walks of life thrown together.  From the privileged officers down to the regular soldier.  No one gets off easy in this situation.  The Zulu war chants and ceremonies have to be mentioned for their powerful impact on the film.

The performances are top notch.  Stanley Baker and Michael Caine top the cast.  Their relationship with each other tells a tale of social class.  Also the way they interact with the men.  Real good work.   Jack Hawkins as the Reverend supplies his usual stand out performance.   James Booth as ‘Henry Hook’ plays a favorite CB film character.  Totally self centered until he has no choice but to help.  Patrick Magee as the doctor adds to the great cast.  Nigel Green as Sergeant Bourne was made for his role.  Great casting.  So many other performances that stand out.

Last words to Stanley Bakers character when asked about how he felt after his first battle:

“First Time?  Do you think I could stand this butcher yard more than once”

Sit back with some popcorn and a beverage (a big screen helps) and enjoy a very good motion picture. 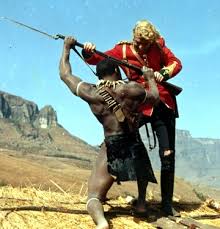