CB’s friend Tim, with a sly smile (Illegal) on his face  said “You’re going to like these guys”.  CB hadn’t even heard of this band.  He lent me the record and I did what I thought I should do, I listened to it.  I knew I was in for something different because of Tim’s previous recommendations.

Vibes, percussion and some kind of ringing noise start the album.  This stays in a repetitive groove for a bit then starts to fade.  A violin comes in with a cool riff, loved it right off the bat.  It’s joined by some distorted guitar then drums roll in and boom!  An explosion. What the hell is this?  Heavy metal?  They take it down again, build it back up and explode again.  CB was digging it.  Loved the heavy, hard edge.  Combo violin, guitar, drums.  The band kicks into a jam for the rest of the song.  This wasn’t soft music.  All the different changes in the first song appealed to CB.  Lots going on for CB’s ear and head.  Barrage of sounds.

The next cut ‘Book of Saturday’is a little more subdued with some smooth guitar licks with some equally smooth vocal.  Sounded good then and sounds good today.  ‘Exiles’ turns into another jam for the band with David Cross’s strings giving it a symphonic feel.  The rest of the band adds to this feel.  I was really digging John Wetton’s vocals.  Robert Fripp’s guitar was a new style for CB but he was loving this music.

‘Easy Money’ opens side two.  Hard rock style.  Great guitar and “Devices” and “Allsorts”.  Bass and drums keeping the beat.  Jamie Muir’s percussion and allsorts filling in.  This is one cool song and and it became a CB favorite.  Fripp, Bruford and Wetton lay it down.  Love this tune.  Cross comes in at the end just to top it off.  Man!!!   These guys could play. 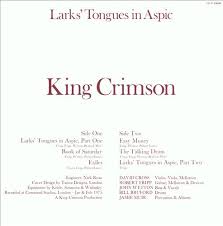 ‘The Talking Drum’ and ‘Larks’ Part Two’finishes off the record with more of this great music.  This was one good record  by a very good band.  CB has to mention them all.  Bill Bruford on drums is fantastic.  Jamie Muir doing his thing on percussion just added to the quality of the music.  John Wetton’s bass and vocals fit perfectly (Love this guy’s voice).  David Cross’ style of violin and viola play an integral part in this music.  CB couldn’t get enough of his playing.  Robert Fripp is something else.  The sounds he gets and the style(s) he plays just blew CB away.  It would be hard to say what style he liked best by Fripp.  I guess it’s the one he’s playing at the time.

This music is not everyone’s bag but it was CB’s.  It was a great listening experience.  Some new music to add to the pile.  He was becoming a lost cause in the mainstream world of music.  He was discovering that there was so much good music out there.  He just couldn’t help being drawn to this kind of music.  He didn’t know anything about the band just what he heard on this LP.   He wanted more of this music but for the time ‘Larks Tongue’ was going to get some heavy play.  He was going to have to put up with his parents and neighbors screaming at him to “Turn that down!!!” (Hea

My friend Tim was a gold mine when it came to turning me onto great music.  It was like it was “secret shit” and not many people knew about it.  I wonder what he’s listening to today?

(CB chanced onto some footage of King Crimson doing some of ‘Larks Tongue’ on some midnight show back then. That was very cool.)