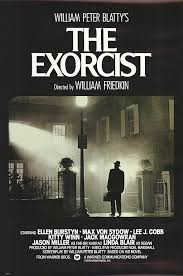 The film opens up in the desert of northern Iraq at an archaeological dig.  A figure is uncovered and brought to an older man.  This sends the man, a priest into some sort of inner turmoil.  In the last shot of this place we see the priest facing a statue in an eerie standoff.

We cut to Georgetown where we find a successful single mother and her daughter.  The daughter, Regan starts to act out prompting the mother, Chris to seek medical help. Reagan’s behavior starts to escalate into uncontrollable, dangerous territory.  Chris, at her wits end, seeks the help of a priest, Damien about the possibility of an exorcism.  Damien who’s having personal questions about his own faith tries to discourage Chris but events force their hands to proceed with the idea of an exorcism.  The faith challenged Damien gets permission from the church and reaches out to Father Merrin, the priest from the opening, to take on the task.

The two priests, one old and fragile, the other with fading faith team up to take on the Demon that has possessed Regan.

Babyhead saw this film at a drive- in with his cousin giving a play by play as the movie ran.  Despite that, CB really liked this film.  Sure it was scary but he got caught up in the story and the performances.  William Freidkin pulls off a tight entertaining film.  Managing to bring all the subplots together. William Peter Blatty supplies the screenplay from his story.  Mike Oldfield provides the excellent music. 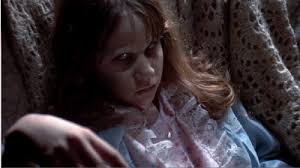 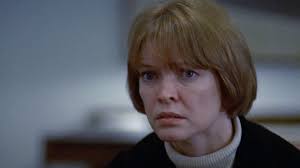 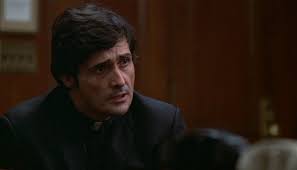 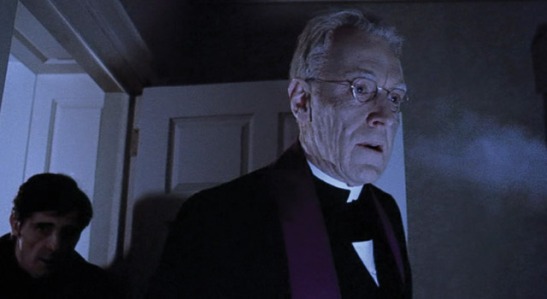 But I think the thing that really hooked CB was the performances especially from Ellen Burstyn, Max von Sydow and Jason Miller.  The supporting cast are are solid.  Linda Blair as Regan goes through self torture in her role.  CB always likes Lee J. Cobb who play an older detective investigating a murder which leads him into the thick of things.

Burstyn is all exhaustion and hopelessness.  Showing a vulnerable, worn out, not very flattering side of herself.  What a great actress.  Max is just perfect casting as Merrin.  World and battle weary.  Put the camera on him and you buy his performance as real.  The depth and chops he brought was gold.  Jason Miller, CB thought was outstanding.  Same as Max and Ellen you buy him as the character right away.  Struggling with his faith, guilt.  Nothing cliche about his performance as a priest.  He’s a real living breathing human being with real issues.  Great work.

Lots of memorable scenes.  All the possession stuff that Regan goes through.  Damien and his mother.  Burstyn’s frustration with the doctors.  Merrin’s arriving.  Chris answering the door and Merrin standing there.  Just the look on her face says it all, in a living nightmare.  The actual exorcism.    The scene when Chris asks Damien “Is she going to die?” and Damien answers “No”.  Great scene.

So CB’s take on this film is yeah it got a lot of ink with all the gross, freaky shit that went on but underneath that is a really good motion picture.

So if there’s a drive-in movie still in your area fill up the old Buick get a play by play cousin and go see this film.

15 comments on “Movie : The Exorcist”