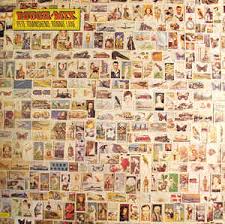 Didn’t know what to expect from this album.  Bought it because I liked the Who and also Townshend’s solo album ‘Who Came First’.

‘My Baby Gives It Away’ is a little rocker that opens the album.  Pete takes the vocals.  Second cut is the first time CB knowingly heard Ronnie Lane (Had listened to the Faces but was unaware of the connection).  It didn’t take long to like the song or Lane.  Some good harp and violin help it along.  Liked the lyrics and Lane’s vocals.  Title cut is an instrumental with some help from Eric Clapton and some guy named Rabbit playing some mean organ.

Fell in love with ‘Annie’ on the first listen.  What a beautiful song, sung with subtle passion and feeling.  Charlie Hart’s violin didn’t hurt.  From this point on Ronnie Lane was on CB’s favorite list.  Not to be out done, Pete comes next with ‘Keep Me Turning’.  Had heard this side of Townshend on Who records and solo work but he nailed it here.  Great lyrics and images.  “Bow tie tying”.  ‘Catmelody’ is a raucous tune with Mel Collins doing a number on the sax.  Henry Spinetti* (see note below) drums lay it down.  CB has felt “black and blue” after a night of having a few sociables.  Great tune.

At this point in the LP, Babyhead was completely hooked and looking forward to side two.  ‘Misunderstood’ is a cool little Townshend tune.  ‘April Fool’ is another Ronnie Lane song and it’s another beauty.  Lyrics (“we used to rogue so freely”), violin, Lane’s heartfelt singing.  What can I say, the music just  got to CB.  ‘City’ is a Pete gem.  It conjured up a mini film in CB’s head.  Love the strings and the narrator in the song.  ‘Heart To Hang Onto’ is a real good tune with Townshend singing the chorus and Lane the verses.  Both sing with passion and soul.  The song kicks into a little rock interlude then gets back to original tempo.  The two voices remind me of the Band and their use of different voices among the group members.  Love this song.  Album ends with Pete dedicating the last cut to “the Old Man”.  Nice way to finish the record.

CB was familiar with lots of the musicians that played on the LP.  Eric Clapton, Mel Collins, John Entwistle, Ian Stewart.  It also introduced him to some new ones.  Henry Spinetti’s drumming was solid , Pete Hope Evans on harp, Rabbit on organ, Lyle and Gallagher.  Everyone that played contributed to a fantastic record.  Absolutely loved this album.  It was my intro to Ronnie Lane which opened up a whole bunch of new music.  Lane’s music became some of Babyhead’s favorite stuff.  Something about him and his style.

Pete and Ronnie made some great music together and then rode off into the sunset.  ‘Rough Mix’ is a special record for CB.  It hit something in him on a lot of levels.  It made him feel good.  What else can I say.

(Note : One of the cool things about sharing thoughts on music I love,  I get to rap with knowledgeable music people.  Case in point.  ‘yeahanotherblogger’ commented on this piece and mentioned that he “thought Charlie Watts played on a couple cuts”.   CB has listened to this record since 1977 and didn’t know that.  So on ‘My Baby Gives it Away’ and ‘Catmelody” Charlie is on the skins.  And he sounds great!  Henry still does a solid job on the rest.  Thanks Neil )

This entry was posted on January 8, 2017 by cincinnatibabyhead in 1977Album, Pete Townshend, Rock Music, Ronnie Lane and tagged Ronnie Lane, The Faces, The Who, Townshend.