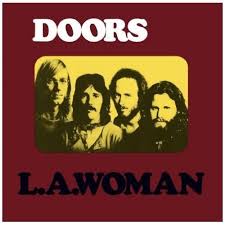 ‘The Changeling’ opens up the album.  What a great start.  Heavy beat, organ then Morrison’s vocals.  When Cincinnati Babyhead hears this song he instantly thinks of the album it comes from.  What’s not to like about this opening cut.  It’s the Doors.  That’s good enough.  ‘Love Her Madly’.  Just a real good cut.  Love the tempo.  Bass heavy for’Been Down So Long’.  Bluest.  Contributes to the LP.  Old school.  ‘Cars Hiss By My Window’ love this tune, love this album.  Babyhead’s style.

Manzarek’s keyboards does it.  Always dug his playing and his sound.  Densmore  and Scheff set the tempo for the title song.  Krieger’s guitar cooks.  Love it when these guys jam.  Onto side two.

‘L’America’ opens the side and is a solid Doors tune.  ‘Hyacinth House’ (CB had to bust out the dictionary for this one) changes the pace but it’s good.  (hyacinth- any bulbous liliaceous plant of the genus Hyacinthus, esp.H. orientalis, cultivated for it’s spikes of fragrance, white or colored bell shaped flowers. Random House Dictionary).  Babyhead wouldn’t even crack a book at school.  What he’d do for rock n roll. 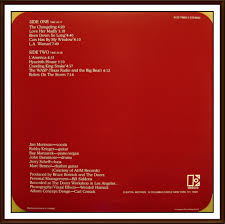 ‘Crawling King Snake’ is another slow blues written by John Lee Hooker.  Cincinnati would be checking him out.  Simple straight ahead blues Doors’ style.  ‘The WASP’  Yeah.  Can’t resist the big beat on this one.  Great intro.  It makes you move.  Cool organ again.  Morrison is right on here with his talk, sing vocals.  Love it!  The speakers were jumping off the floor with this one.  Bass heavy.

The album ends with ‘Riders On the Storm’.  A Doors tune all the way.  Their style.  It has a real mood and tone to it.  The band puts it together for this one.  Manzarek’s keyboards, Krieger’s jazzy subtle guitar, Densmore and Scheff  keeping  it together.  Morrison topping it off with his thing.  Great vocals and lyrics.  Who’s playing the rain?  Good ending to a real good album.

Babyhead was familiar with the Doors but this was the first whole album he got to listen to.  He dug it then and digs it today.  The is a good album by a real good band.  They make good music together.

‘L. A. Woman’solidified the Doors as one of CB’s favorite groups.  Liked their music, liked their sound.  He liked LP’s  and this was and is a good one.

This entry was posted on June 19, 2016 by cincinnatibabyhead in 1971 Album, Jim Morrison, John Densmore, Ray Manzarek, Robby Krieger, Rock N Roll, The Doors and tagged John Lee Hooker, Love her Madly, Riders on the Storm, The Changeling, The WASP.