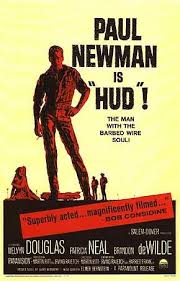 We’re on a highway in big sky country.  Prairie, ranch land.  Teenage boy gets a ride into town early in the morning.  He’s looking for his uncle Hud.  A man is sweeping up glass on the sidewalk and the kid asked him what happened.  The man answers “I had Hud in here last night is what happened”.  The kid eventually finds his uncle’s caddy parked in front a married woman’s house and interrupts a tender moment.  He tells Hud he’s needed back at the farm.  We just got a taste of Hud’s world.

They get back to the farm where they find a dead cow.  The old man is worried about it and wants to call in the state vet but Hud doesn’t like that idea.  You can feel the tension between the two men.  Father and son stuff.  The state vet eventually comes out and says it could be “foot and mouth disease”.  He’ll have to do some tests but it doesn’t look good.  Could mean disaster.  So we follow the characters as this story plays out.  Cincinnati Babyhead was engaged.  The straight laced, hard working, honest father set against the son with a different take on things.

Larry McMurtry wrote the story and it’s good.  Ritt and cinematographer Wong Howe put you in the setting and the landscape with the characters.  Beautiful.

Newman as Hud is all about Hud.  Drinking, fighting and tom cat’n.  He never wavers.  He’s unapologetic.  Unsympathetic and he pulls it off.  Babyhead  found something appealing about the don’t give a shit attitude of the character.

Douglas as Homer is bang on.  Subtle performance.  You can feel the weight bearing down on his character.  The camera catches it. 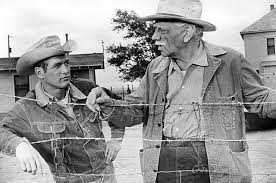 Patricia Neal is something else.  CB loves this performance.  Alma is one of his favorite film characters.  Neal brings so much without having to perform.  It’s all there.  She breathes life into it.  What a woman!  “It would have happened eventually without the rough house”

deWilde sits in the middle.  A kid trying to figure it out.  Looking to the adults around him for some direction.

Newman and Neal have a scene that will raise a few goose bumps.  Doesn’t get any more real.  Another scene near the end at the bus stop is solid, great film acting.

“Hud’ Might not be everyone’s bag but it was Babyhead’s.  He loves this kind of setting and landscape.  Simple and raw.  Great dialogue.  Plus he wanted that Caddy convertible.

Great film. Get small town and check it out.  It’ll get in your bones.