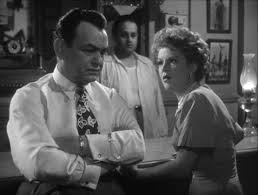 “One thing I can’t stand is a dame that’s drunk”.  Opening line of a fantastic scene.

Johnny’s gal needs and wants a drink.  So if she sings, he’ll give her one. That pretty much sets it up.  Johnny and Gaye air out they’re messed up relationship in a hotel in the middle of a hurricane.  She sings.

“Moanin’ low my sweet man I love him so, though he’s mean as can be”

It’s Claire Trevor’s scene and she is real good!  Her humiliation is felt by everyone witnessing it.  Babyhead was feeling it.

Huston captures it all.  Is there a better listener than Bogart?  All the actors are in the moment.  Eddie G is Eddie G.  What a great actor.

Goosebumps for CB.  Give that woman a drink.  She deserves it.  And give that Johnny guy a kick in the balls.