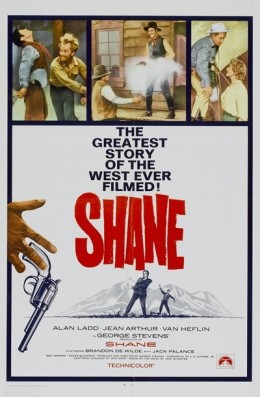 The film opens with a lone rider making his way through wild, untouched, territory. He rides into the middle of a land quarrel between homesteaders and ranchers.  Pretty basic story.

But under what we see on the surface there is something dark about this film and CB could feel it. The stranger, Shane, is carrying some kind of past with him and it’s a heavy load. You feel this in his character but you can also feel this darkness in the setting and the situation. Like dark things follow this guy and eventually will catch up to him.

He ends up working for one of the homesteaders but you know this way of life doesn’t suit him. Working the land isn’t in his makeup. He gives himself to it trying to fit in with these people. But his real work includes a gun and the whatever that brings.

When he reluctantly shows the homesteaders young son the tricks of the trade in gun-fighting, it doesn’t come across as some cornball romantic lifestyle, it comes across as deadly and serious. When Shane fires  his gun in this scene, it’s loud and it’s dangerous. We feel it. It’s not kids play. CB was as wide eyed as the kid was.

The bad guys in the film are real and underplayed. When Wilson, the hired gun is brought in to scare off the homesteaders you know shit is going to happen and the man with the past will be involved.

The performances in this film are top notch, too many to mention. All are bang on. The great scenes just keep coming. The fist fight with Chris and Shane. The crack of the knuckles, the side talk as it takes place. You order soda pop in this shit hole you end up in a fist fight.

I don’t think there’s a better or meaner, colder scene in the movies than when Elisha Cook Jr. goes up against Jack Palance. The whole setting. Desolate muddy street, storm coming in, dark skies, all helps set the tone. Great film-making. CB was right in the middle of the action. 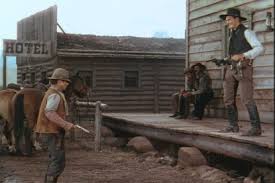 This sets up the ending. Shane is drawn back to what he’s been trying to leave behind him. The scene between Wilson and Shane will raise goosebumps. The dog in the saloon knows what’s coming and lurks away. Great shot. “I’ve heard you’re a low down Yankee liar”  “Prove it” 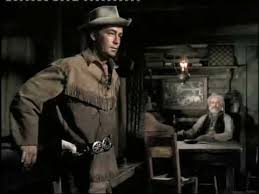 This was probably the first film Babyhead ever watched. A pretty good introduction into the world of film. Sense of time and place. Cinematography was beautiful. Great beginning, middle and ending. Great film!

Ride in and ride out of this film just like Babyhead and’Shane’ did.

One note. Cincinnati Babyhead has watched a lot of films since this one and revisiting it he sees all the great character actors that were in it. Man were they good.